I have found a few discussions about this theme, both on edge and navio2. I understood both flight are not compatible with Frsky passthrough telemetry (at least not advertised for it), however the “standard” mode is compatible right out of the box, according to Dmitriy Ershov:

" […] according to our tests, both Navio2 and Edge can be used with FrSky telemetry in the standard mode and work fine with it. The passthrough feature isn’t supported on Navio2 and Edge right out of the box and we never advertised it should work."

Hi Patrick, I’ve re-opened the thread so you can continue the discussion here. Please remember to follow community guideline: https://community.emlid.com/faq

What exactly do you mean by “standard mode”? Is it the Repurposed protocol?

If YES, this means we can get this data: 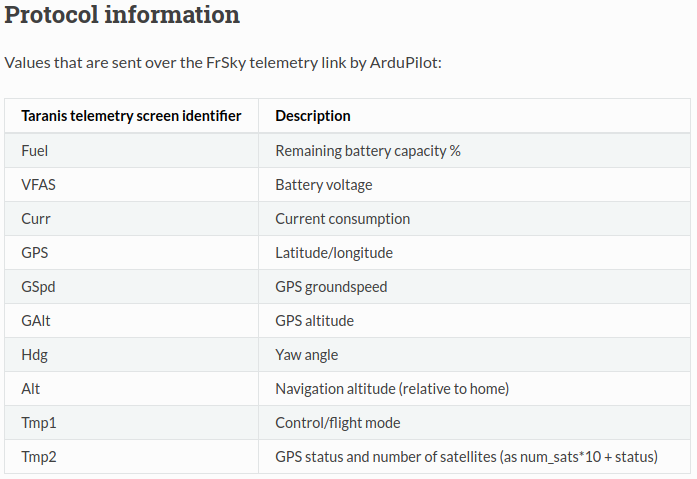 Please, confirm if this is what you mean, and if possible how to configure it in ardupilot, specifically which SERIALx_PROTOCOL is used by the RC receiver.

Edge and Navio2 indeed don’t support the passthrough feature as mentioned in the thread. It means that communication via both PassThrough protocol and Repurposed protocol can’t be configured.

Thanks for the repply, however I still did not understood it fully.

According to the ardupilot documentation, there is only two protocols for Frsky Telemmetry:

According to my research, there is also a third option, using external hardware: MavLink to FrSky Converters, no way this is what Patrick indicates as standard both, also is not what Tatiana said before (Passthrough FrSky telemetry not working on RP3/Navio2) as she did not indicated the need of such conversor.

By standard mode, we mean using the FrSky receiver for the RC input. For that, you can use PPM and SBUS signals as described in our guide. Usually, all you need to do is to bind your receivers and complete the process of calibration.

As I’ve mentioned before, it’s not possible to use FrSky receivers for the telemetry because the support of the PassThrough protocol is not implemented. However, you can use other radio modems that can be connected either over UART or over USB.

Thank you very much, that was clarifying. My only question left is:
FrSky Passthrought telemetry is ONE protocol, there is also the "Reporpused"protocol, I guess both are not suported, is that correct?

You’re correct. It’s not possible to use the Repurposed protocol either as it has been superseded by PassThrough.