did you calibrate the accelerometer? Is the GCS HUD/PFD leveled, if you place the copter on a flat surface?
Did you move the copter after connecting power?
Did you let it sit on the ground with running motors for some time, before trying to take off?
Did you change the AHRS orientation without recalibrating the ACC afterwards?
Do you have stabilize mode selected?
If I forgot anything, I will add it later.

I’m experiencing the same problem with Copter-3.3 RC7. However, Sebastian’s questions seem to imply that one needs to follow the steps below, is that correct?

Everything is calibrated and checked as per the list above and Emlid & APM documentation. However, it still flips when it tries to take off, as show below.

Can you make a video without Props.
Tilt the copter around each axis and check whether the correct motors start to spin.
If this video shows that everything is fine, then possible reasons are:

To adjust the PIDs mount the copter on the diagonal, and mount two propellers on the free arms.
Adjust the PIDs … This will also indicate vibration problems.
My current guess is that the motors are not connected to the right channel

I’m using a brand new Iris+ that I just took of the box. I calibrated the Accelerometer and the Compass without problems, and since the HUD was showing the correct orientations, I didn’t change either the AHRS_Orientation or the Compass_Orientation. However, after I disconnect and connect the battery, the HUD reports “Bad Compass Health”.

I’ve already checked the motors and props several times and they are hooked up correctly. The Iris+ is pretty good on guiding you with that (hard to mess up).

The classic test you suggested highlights the issue (although I kept the props on). It fights the tilt when I tilt it left or right, but it does NOT when I pitch the nose up or down so some parameters or calibration might be wrong.

Some additional information, I am using the latest Copter-3.3 branch and I’m powering the servos rail using the power from the SPI connector since I didn’t have a spare BEC. Randy did the same thing, but he used the I2C connector instead. I don’t think that will make any difference though. 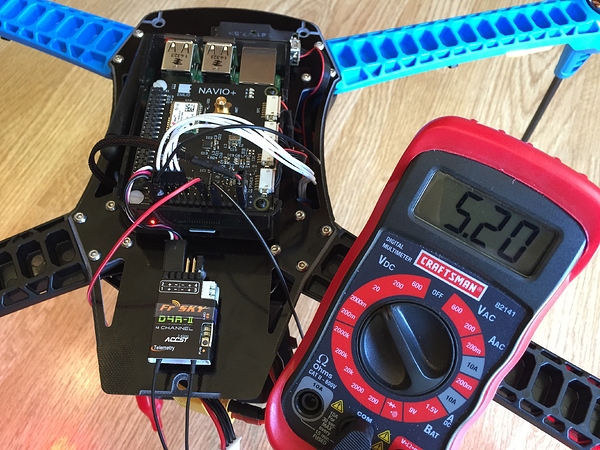 Interesting. Can you try 3.1. Maybe it is a bug.
Alternatively, PID is wrong (too low) or hardware broken (I think).

The navio+ board has the front orientation in the direction of the usb ports. The motors 1-2-3-4 must be connected with this orientation, so perhaps you need to swap the ports 1-2 and 3-4 to your motors.

Martin, the navio+ board is mounted in that direction (see pic below) and the motors are currently connected for this configuration:

However, it seems that you are saying that they should be connected for this one instead:

Is that what you meant? SOLVED. Swapping the motor ports 1-2 and 3-4 resolved the problem. Thank you, Martin! Thanks Daniel for suggesting the test, that helped too.

I did the same mistake once