Dear Navio-Users,
I desoldered the ublox M8N chip and replaced it with a M8T, they should be compatible as it was already mentioned here.
But it seems that it doesn,t work, i get no connection to the ublox M8T chip (with the given example code and the ubx-spi-to-tcp code to connect it with the u-center).
Has anyone a tip to solve this problem with the M8T chip.
Thank you

It works! There was a contact failure during soldering.
My navio supports now raw-data output from the M8T-Chip

Can you post a picture. How the unsoldering worked out?

Yes, pics or it didn’t happen.
Also, where did you get the module from? 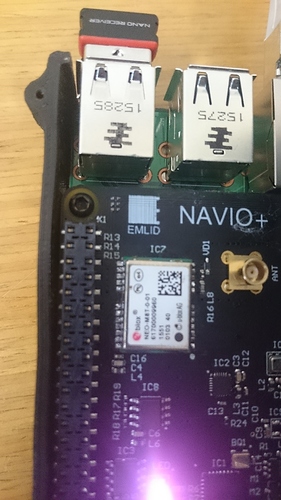 Here can you see the M8T chip on the navio board, you can activate the RAWX and SFRBX Frames for raw data.
It works the same as the M8N.
The firmware update would be interesting because if an error occurs then there would be a reset to the 2.01 firmware, where RAWX and SFRBX is not supported

Nice, do you also have a photo of your soldering tip?
I guess, you used a de-soldering vacuum gun.
The contacts are very close, is there a smart way to avoid the solder melting together?

No not really.
i only can say that its not so easy and you should have a steady hand

Hi D,
A bit late to the question, but how I do it is:
remove label, use hot air to melt the module off the board, being careful not to disturb the GND shield if possibel.
Clean old solder with alcohol, or removed and add fresh.
Add flux to the pads, and tin, but don’t over do it, in case of tracking.
Place the new module accurately, heat up till it drops, and I ‘lightly’ hold it down with tweezers.
(Watch out for other components moving)
Clean with alcohol.
Stick on label.
Done.
Camerart