Changes in Radio Telemetry with Navio2?

I’ve been trying to get my drone ready to take out to a field and hopefully perform the auto tune for the PIDs. It makes me a little nervous since it is a lower KV drone and I’ve heard there is a possibility for issues with the motors.

Anyways, I am trying to get my radio for telemetry/mavlink to work. I had it working when I was using the same two radios and a Navio+ on a different drone.

But I can’t get it to work with the Navio2. It fails out with no heartbeat received.

I can see jibberish when I type on my computer to the raspberry pi using like teleterm and minicon. I thought I would see the actual letters I typed but I get other symbols instead. Is this a problem?

Anyways, I’m not sure what I’m doing wrong or if something has changed between Navio+ and Navio2.

Looks like a baud rate mismatch. Make sure that baud on radios and ports matches.

Do you have screen shots? I’m not super familiar with the differences.

I had also some troubles, but the problem was on my side.

Here is a picture of when I load the settings into the 3dr radio config tool. 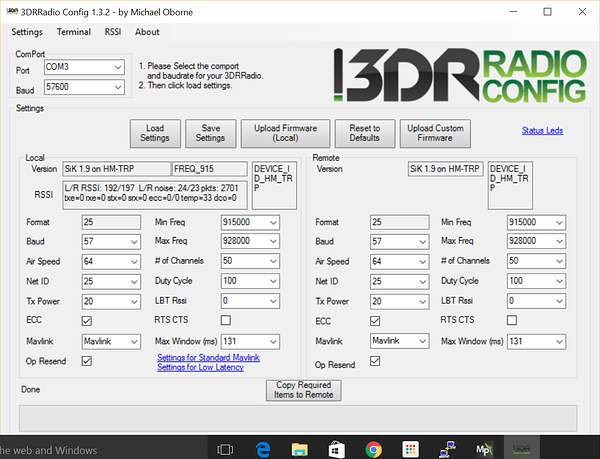 I also verified that the baud on the pi is set to 57, with stty < /dev/ttyAMA0

How does the output in the “Terminal” mode look if you start ArduPilot?

I’m not sure what you mean with that.

Have you tested, whether you can receive a signal.
The 3DR radio config program also has a tab “Terminal”…

Here is the screen shot of running terminal and then minicom through ssh. 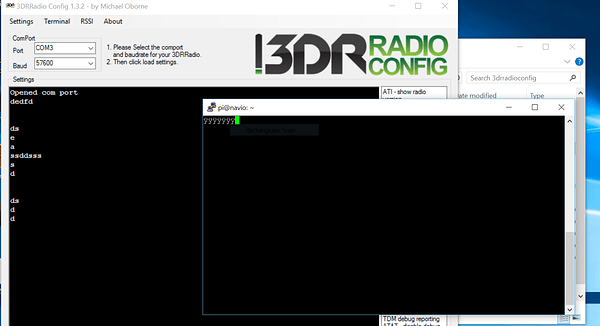 To ensure you don’t send binary data, can you run this test script?