I went to plug the DF13 cable to the bottom DF13 housing while trying to test the GPS timestamp feature, and when applying a normal amount of pressure the housing broke off the board (See attached images).

*Note: I cut the plastic and pulled it back to examine the damage. 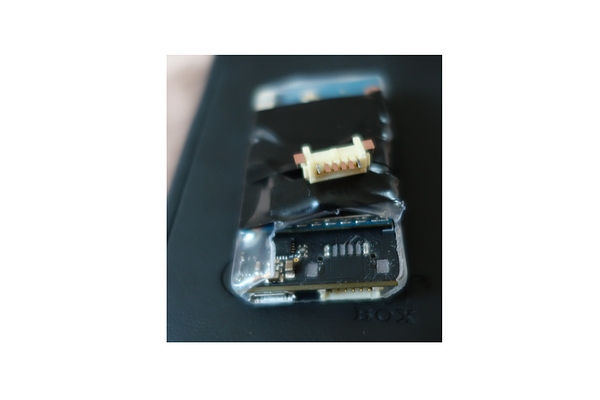 As a side note, I have been unplugging and replugging these little connections over and over knowing that I will have a failure one day. I have been thinking that a set of short male/female extensions for each connector would be great to have (including antenna and USB too). Those extensions could be incorporated into a case so that if the connectors get worn out or abused, then it is only a matter of replacing the short extension cable and Reach will still be good as new.

Thanks for the response. Solid idea about the short connectors. I wish I had gone that route prior to this… I would suggest it, and I will implement it myself.
AM

Same thing happened to me on my navio2 UART plug. The pinkish colored pieces on the df13 connector are the pads off the board. I was unable to solder mine back. I have since used a two part epoxy to prevent this on the other plugs.

I know that the df13 connectors seem to be the standard but hope soon we see a better more robust connector used.

Anybody has micro sodering skills?
Well, I don’t, and would hate to have to throw this perfectly working Emlid Reach to the recicle bin.
Emlid team, would you do a repair on this for a small fee? And if so, can you please PM me with a quote?

Because the solder pads and traces have been ripped off of the circuit board, it is not just a case of soldering the connector back on. The repair would not be impossible, but probably 8/10 on the difficulty scale.

You don’t need an Emlid expert for this repair. You need the old skinny guy working in a back room. He is bald with some long grey hairs and looks at his work through bifocals and a magnifier. He smokes while soldering, and uses test equipment with cathode ray tube displays. The desk is backed with small drawers containing innumerable components. Looking around the workspace, you can only identify about 2% of what you see there. When you find that guy, he might fix it for 20 or 50 bucks. Maybe even free if you catch him in the right mood.

For anyone else, I’d say you are looking at a 1 hour labour charge and a 30% chance of it working good as new.

Another, more serious option to contemplate is offering it for sale at a discounted price to someone who doesn’t use the DF13 connector. Then get a new replacement for yourself.

I was afraid the Reach wouldn’t work or something, but, if it works, I will keep it and use it differently (bring power thru micro usb)

That is why I did cut all the noses of the plugs and I put my finger on the connector when pulling the plug. The plugs are a little bit loose, but if you take care or fix the cables with tape it is no problem. I don’t think those connectors where made to be used regularly.

Even without the connector the unit should work as base without any limitations. I would even prefere to go for this solution than trying to fix it and probably cause more damage while doing so.