Base getting fewer satellites?

This is a new problem for me -

I use two Reach RS units with RTK and PPK corrections to collect ground-based GPS data.
Recently, while doing some troubleshooting for a different issue (trying to get a more consistent fix, just like everyone else), I noticed that the unit I use as a base was consistently reporting messages from 1/2 to 1/4 as many satellites as the rover unit was. (Ex: Currently, my rover is reporting 22 satellites while my base is reporting 11. Earlier today, my rover was reporting 20-25 satellites, and my base was reporting 5-6).

I have noticed that also. Same antennas, same size ground plane, all settings the same but different sat counts.

@DaneGer21 Could respond to my two questions too? Then we can compare.

How are you checking how many satellites the base is seeing?

If you are checking on the rover than the number could be lower, as only the base satellites for which corrections are received on the rover will be counted.

If you are checking on the base please mind that depending on your device screen size there could be a different number of satellite bars shown. This is just for clarity of display.

Here is a SAMPLE pic, this is NOT my pic(taken from EMLID docs for reference only), unless I’m mistaken I thought this is where it lists the total number of satellites that are used/viewable… 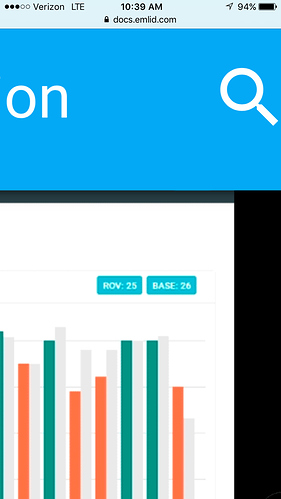 This is the number of base satellites for which corrections are received on rover. So if you enable only GPS in RTCM3 messages of base mode you will see few satellites shown as “base” on the rover.

Hi @bide and @igor.vereninov , thanks for responding!

My ReachView version for both the base and rover is 10.0.0 (I’m opting out of the development updates for now), and I’ve gotten similar results on reboot.

I was getting the number of satellites from the same place as @DaneGer21.
@igor.vereninov makes a good point that the Rover should only be receiving information on satellites for which the base is sending messages. That said, the base was consistently showing fewer satellites even when I was looking at the ReachView display for the Base, alone. I swapped back and forth between the Base and Rover hotspots to confirm this was the case.

Well, weirdly enough, when I took the units out in the field on 2/22/18, they were getting equivalent satellite coverage again. The world may never know…