Base and Rover set up 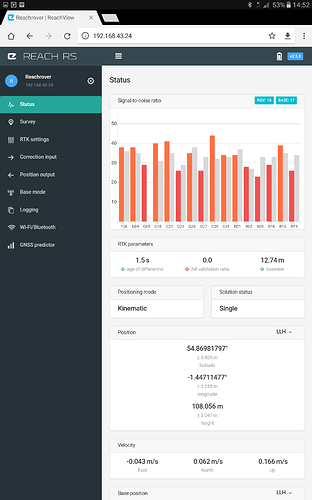 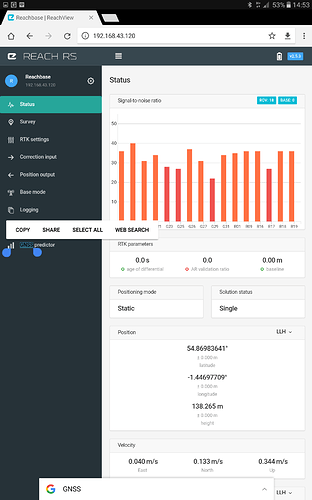 This is normal. Correction data is going only in one direction, from the base to the rover, so the base does not have any info from the rover, but the rover shows both.

Yes, this is correct. On the “base” status page the “base” is the “rover”

Thanks again Brent, as you might have guessed I am a complete novice and I am pretty sure that won’t be my last question. Out of interest what sort of accuracy should I expect with just the Rover and The Base station ( no CORS or post-processing) ? Thanks again

You can expect cm level accuracy when measuring where your rover is relative to your base station. This is called relative accuracy. If you place your base station over a known point and enter in accurate real world coordinates, then your rover will provide you with cm level accuracy in real world coordinates( absolute accuracy)

So if I get a know co-ordinate from say, Google maps and enter it into the base station I would get that level of accuracy? Thanks again Brent , this is all very helpful .

Hi Brent , sorry to bother you again. Could you tell me which section of the app i use to enter the base position please? Thanks again

It would be accurate to the same level of accuracy you would be able to pick off of Google maps, which would, in my understanding, would be accurate at best to several metres. If you require high accuracy absolute positioning, I know of the following options. These would all be used to determine absolute location of your base station.

In order to enter base position in Reachview, access base station in Reachview and go to base mode and under Coordinates input mode select "manual"
There you’ll find the option to enter coordinates.
for more info refer to docs
https://docs.emlid.com/reachrs/common/reachview/base-mode/

Thanks for all this advice Brent, its really appreciated. Thanks again