I’m trying to configure a Reach connected to a Pixhawk using the instructions here:
https://docs.emlid.com/reach/apm-integration/#configuring-reach-to-work-with-pixhawk

but the configuration screen does not contain the same fields as the instructions.

1.) There is no UART selection. Its just a text field.
2.) There isn’t an ERB output format. There is only llh, xyz, nmea and enu.

The reach is running 1.2 of the firmware obtained from here:
https://files.emlid.com/images/ReachImage_v1.2.zip

Is there something else I need to do to update the Reach for the Pixhawk integration?
(I’m using 3.4.2 of Arducopter as well.) 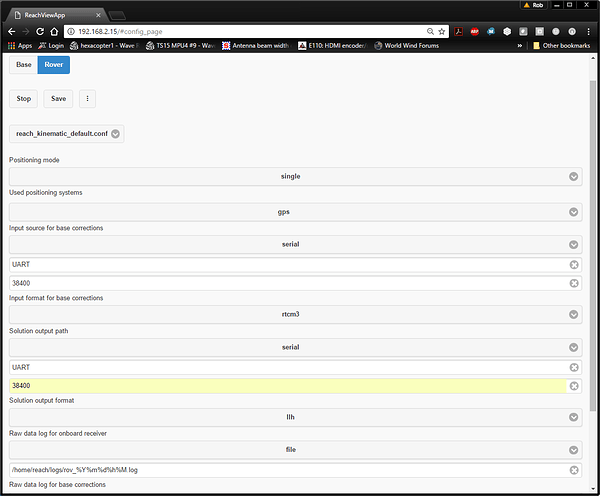 yeah you need to update reach view app!
(options: upper right on the main screen and then update button if i remember correctly!)
the image provideds an old version

It didn’t work. I need to get a direct link to the updated firmware. Do you know what is is?

which version are you running?

1.2. That’s the only version I’ve found on the website. This one from the forum may be closer:
https://files.emlid.com/images/ReachImage_v2_beta.zip
But not the final v2.1.2 version mentioned here: Hey everyone! We've released v2.1.2 update which fixes Serial/USB problems, misbehaving BT output and a couple of other small issues. Small note During the update, progress bar might pause at a 100% state for some time(usually when updating...

sure reach module has internet connection?
offline update is quite a procedure ( Updating ReachView with no internet available? then do an offline update )

reach image v2 beta is also an option, but as it is still in beta you have to be aware that bugs are possible until release

I’m on a very slow connection right now so I’d rather download the image and flash the Reach’s rather than use the web app that requires multiple downloads of a large file.

Is the web app supposed to update ReachView? It doesn’t seem to work either.

reach view is just a small update, it is not the entire ímage;

I know, but the web app fails to update ReachView.

which version are u running?

That beta version failed completely. Nothing worked. So I’m reverting back to 1.2.

can you elaborate that a little bit? it is still in beta, so bugs can be found;

The unit would not respond. The stats light went to light purple and never progressed. I could not ssh to the device and the wifi hotspot didn’t start.

Have you done everything step by step to get v2 beta?

Yes, I used the CLI instructions on Windows since the Intel GUI applications fails to install on my laptop.

The process to update ReachView using the web app also failed. I’m getting a red blinking light now. (I reverted back to 1.2 for now, but still can’t update the ReachView app automatically.)

Hi! I'll try to address some of the mentioned issues. The new app and even the new image are rewritten from the ground up. Updating from 1.2 is borderline impossible, even if we thought it would be worth the effort. New image contains countless...

Reach software is defined by two numbers: the image version and the app version.
For the first ReachView the latest are 1.2 and 0.4.9 correspondingly. However, the image we have posted contains the app version 0.0.3, just because it was the newest at the time.

Updating on the slow connection

The first RV has an update system that is far from perfect and the amount of data to download when you update from 0.0.3 to 0.4.9 is rather big. It’s not as big as a whole image, however.

The new beta has a much more advanced update system, it will show you new version availability, progress and such. Moreover, the difference between the default app version beta image app version and the current 2.1.2 is way smaller than it is in the non-beta release, so updating on slow connection will be easier.

Overall, I would recommend using the beta any day. It’s still lacking some features, but mostly is quite stable and much more pleasant to use.