I’m trying to evaluate the positioning improvement with the Reach RTK GPS (as secondary) over single standalone GPS - the Here+ (as primary).

I perform the following test:

My question:
Does the GPS2 message contains the base station corrections? I couldn’t notice any improvement and thought maybe I used wrong data…

What kind of improvements were you expecting?
The corners look better defined and there is clearly an offset between the tracks,
The uncorrected GPS looks filtered and smoothed, which is normal for a non RTK GPS.
Have a look at the GPS altitude, RTK altitude and Altimeter altitude, you will see a difference there.

Thanks for your reply!
Indeed there is an offset, but I expected to something like this: 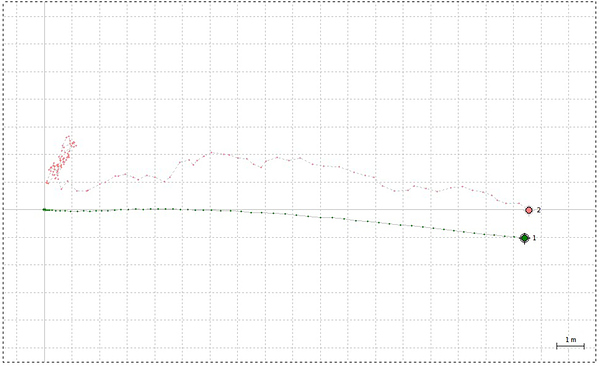 I will look for the altitude as well.

Any suggestions for another test that can show bigger variance?

Also compare the same scale. Last image is 1:1 and your first is more like 1:15
GPS deviced compared might not be of the same quality and could perform differently.

Actually they are in the same scale… (approximately)
The grid and the scale bar looks different, that’s all.

Agree. But higher resolution will reveal inaccuracy better, so comparing tracks like this should be done on similar terms.
Edit: grid it looks like 1:7,5 scale, right?

Higher resolution does not reveal more data…(in this case)
The routes seems the same.

Good, at least now they are equaly to compare.
But from what i am looking at it seems like both are operating under the same condition. But could be tricked if the singel gps were operating very well. But back again to resultion. a 1:1 showing cm plot would reveal if a gps is operating in singel or not. But you need to zoom in an a area with static movement to get enough data in a smaler area

Was Reach reporting RTK Fix position during this test?

Yes. Since the beginning till the end.

It is hard to say anything at this point without seeing the log files for the solution and raw data.