Today I observe using ntrip metode. The connection is good. But why age of differential is always increase Start in 1 then increase until 30s. Then I move the rover, lower again, then increase again

1, 5 or 10Hz ?
and how is your line connectivity?
Test line for high ping/latency. High speed is not necessarily a good line
http://www.speedtest.net/articles/what-is-ping-what-is-latency/

5hz, the internet connection is strength. 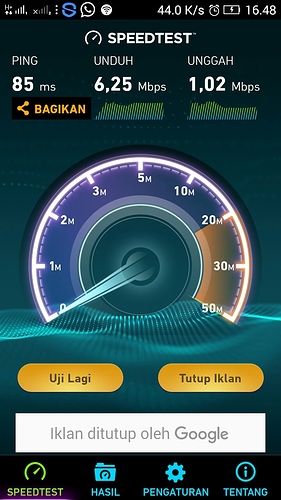 Your ping is somewhat high,but try lowering to 1Hz and see if it makes a difference
Also, you wanna do this test the opposite way. Rover to base and base to rover.

But I have moved the base, then get great result. Maybe the place before is many interference from parabola antenna.

Sure, interference may cause it.
But i read it as you get spiking age each time you move? And this is still the case when your away from any other noice or obstructions?

It’s still strange for me. Not only that situation make me confused, when I got fix, my antenna is over 3 metres, then when I walk under obstacles such as trees or roof, I got float (that reasonable), but when I got full sky view, it’s hard to get fix again, eventhough the green signal is more than 6.
In that condition, I try to changed the settig, such as, turned on the glonass AR. If not work, I increase the gps frequency to 10 and only use GPS satellites. Than I got it’s worked. But when I got float, I change again. But sometimes I couldn’t got fixed until morr than 15 minutes I think, or more over.

My questions, is there any condition when satellites signal is great, connection to base is great, but I still got float, in normal settings (AR glonass is off) and use 5hz?

Satellite geometry, but since you already had fix it should be ok. What mode did you use?,fix and hold or continuous?
One more thing. When moving around and behind obstacles and then in clear view again, new set or combination of satellites is used then with the fix before. This could take more time, it could give you a harder time getting fix.
I posted link to an article about instantanuous, continuous and fix&hold, that article gives a good clue whats going on behind some of the calculation for AR values. Have you read this?
Check your sats that is above 45 SNR is spread in the sky. No good if they are all stuck in one place.

I have read it, but at a glance. would you give me the link.

Check your sats that is above 45 SNR is spread in the sky. No good if they are all stuck in one place

How to check, they are spread or stuck?

I have read just now, but I couldn’t find the solution for my problem. The article said that could be hard get fix in fix and hold after float occurred by obstacles. Maybe later I will try to change continues mode, then change again to fixed and hold. Or maybe you have other solution?


I use rtkplot with output solution from reachview to determine the snr lvl of each satellite
I prefer continuous,i find fix&hold better for stuff like measuring my wrenchs

Quote from link above

“Continuous” is the default option and uses the kalman filter to estimate the phase biases continuously over many epochs. In general, this provides much less noisy estimates of the phase biases and is essential for working with low cost receivers. The downside of the continuous solution is that if bad data is allowed to get into the filter outputs it can remain for multiple epochs and corrupt subsequent solutions, so some care must be taken to avoid that.

“Fix-and-Hold” takes the concept of feeding information derived from the current epoch forward to subsequent epochs one step farther. In the “Continuous” method, only the float solution is used to update the phase bias states in the kalman filter. In the “Fix-and-Hold” method, an additional kalman filter update is done using pseudo-measurements derived from the fixed solution. This is only done if the fixed solution is determined to be valid.

So fix&hold could possibly give you more headache working in areas with high potential error.
I would give each mode a try, to find the one that suits you best.
But point is to not about it .

Which gives me an idea for feature to Reacview. Skyplot with adjustable SNR slider that displays only the satelite in use 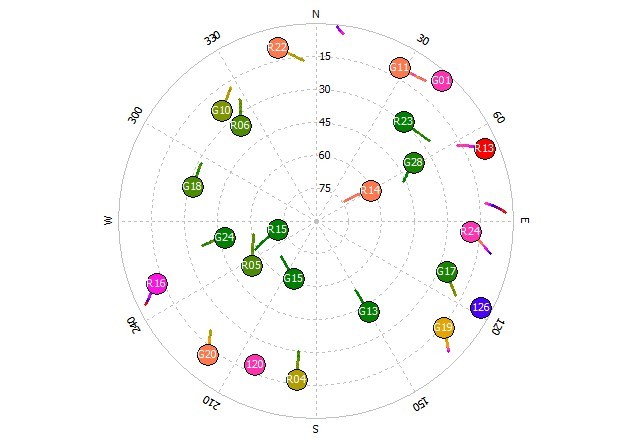 With rtknavi, live sat is fed from reachview, now you can see what satellites used above 45 snr.

So the rtk navi is a way to find geometry of satellite. What kind of geometry could give fix result?

Do you bring laptop in observation?

So fix&hold could possibly give you more headache working in areas with high potential error.

Yesterday I observed in full sky view, I think no much potential errors I think, but I couldn’t get fix for a long time. Headache, too.

At home i use laptop,
You could use bluetooth and phone with gps app to display satellites. This i tested with reachview 1.4.9.

If you look at the picture above, that is bad geometry for my part. 6 good signal (green) but bad location of them.
Better signal might have picked up some of them other sats.

An instant fix button would be lovely hehe

What is example application to display satellite? I use tcp for output solution to my smartphone. NTRIP app as the gate. I never use Bluetooth gps app.

Yeah, i think it was bluetooth gps app.
If not, you can always look at the nr and what satellite that shows up on you app. A bit more hasle though