I have connected 3dr radios to the uart port on the reach. When I start up the reach the two radios lock. The base station is sending corrections. The rover is not saying it has them but the radio shows to is getting the packets. When I directly connect to the rovers radio I see garbage data coming in. I then shut off the correction broadcasting on the base and sshed into it. So make sure this was not something with the data itself I typed directly to the radio from the rover radio and was seeing the correct text but when i typed on the base radio it got to the rover as garbage. If I connect to the two radios via usb and type into them it works. This is happening also with another pair of radios. I have also tried multiple configurations in the radio settings. Has anyone had anything like this happen?

it sounds like the serial post speed is not set correctly. if the speed between the radio and Reach’s serial port are mismatched, then you would get garbage.

off the top of my head, I think this will show the serial speed set for Reach’s serial port.
stty -F /dev/MFD2

They are set correctly. As I said when I connect to them directly over USB they work. Using 57600.

Brad, are you connecting the radio with 4 wires or with 6?

Please try only with 5V, GND, RX and TX. Radio has CTS and RTS on the other two legs and it might be confused by their state.

Ok I tried that. Nothing changed. Please see the pictures.
I know this is the correct baud rate I have checked the AT of each radio.

The left terminal is the base station ssh and the right is the rover radio connected to my computer via usb. I have removed the CTS and RTS wires. The base radio is connected via uart.

In this image I have typed into the rover radio and it comes out as garbage in the base radio. 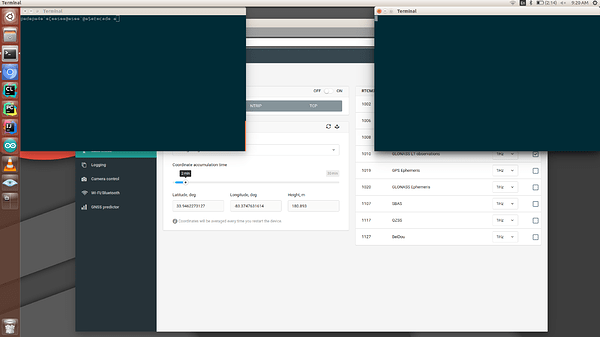 In the second photo I have typed into the base stations radio and as you can see that rover radio can see it just fine. 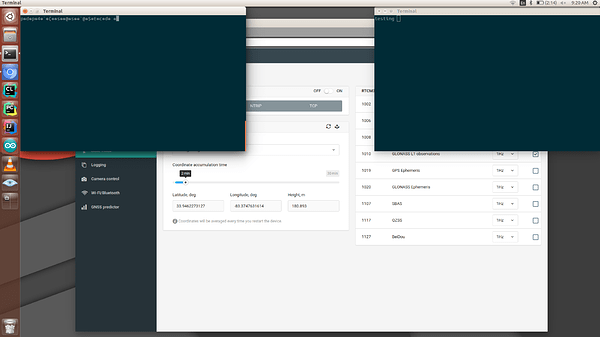 This is weird. What is you swap radios between the units, how would they behave?

Did that, even used an entirely different set of radios.

So this issue is specific to a certain Reach module?

I have a second set of Reaches I am going to try with today or tomorrow to see if this is related to them.

Different reach base and same problem.

I have the same problem at the moment , tried ssh-ing into the devices then i type i also get gibberish data, is there any fix to this?

@sonyccd How long is the UART cable that you use?

To anyone having the same trouble seems like lowering the baud rate solved the problem. ( initially was 57600 lowered it to 9600)

Hello, i am having problems trying to get corrections through Sik radios V1.

i am using RTKLIB SRTSVR to get RTCM corrections from a paid CORS network to my computer, and serve them to the com port of my ground sik radio, the app is ok, green leds coming in and going out, both radios have the green led on, and red flashing, the reach correction input is set to serial, uart, RTCM3 (as network), and actually 9600 rate (i also tried 4800 and 38400, in reach, SRTSRV settings, and device settings), i can not see the grey bars of the base station, the radios are ok, if i do it with the same two radios throught pixhawk/mission planner gps inject, it works without changing anything, also, connecting through Ntrip to the same base stations, works without any problem.