The lack of line of sight due to interference caused by obstruction is one of the challenges encountered when using radio modems in Dar es salaam city located in United Republic of Tanzania. Therefore, I with the help of my fellow colleague came up with an idea to explore RTK positioning using NTRIP and access if its affected by obstruction features and whether increase in baseline length affects accuracy of positioning.
The first test was done to determine the maximum baseline when working using EMLID RS2 in NTRIP mode and whether increase in baseline affects the accuracy of positioning. During the study five geodetic control points in WGS84 datum were used for comparison. Position obtained were in WGS84 reference system and vertical datum used is EGM 2008.

The table above shows the accuracy obtained for a baseline length up to 102 kilometer using NTRIP. The accuracy was obtained by comparing (Northing, Easting and Orthometric Height) of five GCPs and RTK NTRIP observation. 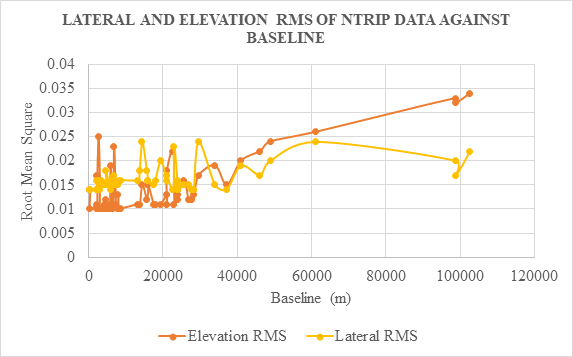 Second test was done to determine the performance of RTK Using radio modem against NTRIP within Dar es salaam city. We used two GNSS receivers EMLID RS2 GNSS (working in NTRIP) and Leica Viva GS16(working in radio link communication mode). Points were established alongside areas susceptible to obstructions such as under high raised buildings and within congested urban squatters. Aim of the task was to compare the precision obtained using radio link against NTRIP. 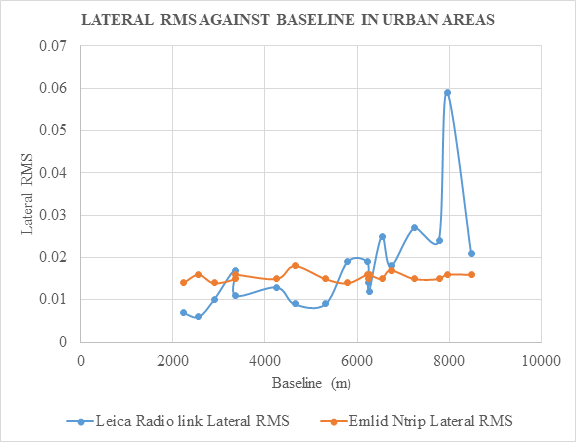 The figure above shows the precision of Leica GS 16 GNSS receiver using radio link lies between 9mm and 6cm horizontally in areas susceptible to high raised building and congested urban squatters. Contrast to the precision of EMLID Reach RS2 using NTRIP whose precision ranges between 1.4 cm to 1.8cm for a baseline distance of nine kilometers. This indicates a deterioration in precision of observation obtained using radio link in urban areas while NTRIP precision remains more constant for the investigated baseline length. Also during field test (Leica GS16) radio link communication encountered several re-initializations which took 2-5 minutes, while with NTRIP communication mode it took 2-10 seconds for re- initialization for points nearby high raised buildings.

Also one GCP within area of interest were used to assess the accuracy of observation when working with both radio link and NTRIP mode.

Results obtained after analysis shows that NTRIP performs very well in the most challenging situation especially in urban areas but its elevation precision due decrease with an increase in baseline. We were also able to obtain a horizontal accuracy of 5.5cm for baseline of 102 kilometers using RS2.

What was your observation time for your data collection?

I have run similar tests using 30 sec data averaging with reset of ambiguities every 30 minutes over a period of 6 hours, repeated over various baselines up to 100 km. Here my findings were that if you need to be repeatably (from one week to another) within ±10 cm vertical (95% of points within that limit over 6 hours), max baseline is ~30 km.

Thank you. The observation time was 60sec data averaging for both tasks. The tasks took two days to complete with an observation period of 8 hours for each task.