I was going to buy a Reach setup for farming a couple years ago, but the kit was out of stock everywhere. Now I’m considering buying one again.

I have recently been considering purchasing a good rotary laser (~$600-1000) for small land leveling, trenching and foundation type work but was thinking that for the same price, a pair of Reach M+ might be able to serve the purpose as well as many others, as well as being able to grade over larger areas and out of line of sight. I have worked with crews that use commercial GPS solutions for this type of work and it’s much more convenient than a laser.

Is there a simple usage method to display a relative height with Reach without involving cumbersome computer equipment in a muddy dig site?

Now we are integrating IMU data so the pole or earthmoving equipment doesn’t have to be in the vertical position. Think of an excavator or a landleveler that is on a sidehill. Basically, the openexcavator app can calculate the position of the cutting edge or the bottom of the pole even if the pole is not 100% vertical. The math for this has proved fairly tricky but I think we’re through that now. Finding a simple way to calibrate the IMU has been our most recent challenge.

Also anybody that needs a nmea position string that has had IMU data and pole height applied to it could benefit.

This is a free and open source project. I am not the programmer but I am in charge of it. There have been a few generous donations that have kept me going. Feel free to contribute in any way possible or have a look and give suggestions if you like. This is designed to work specifically with Emlid’s devices so I don’t think posting here should be against any rules. If anybody wants to add a few bucks

we could move this on a lot faster.

Open Excavator. Contribute to BWiebe1/openexcavator development by creating an account on GitHub.

I feel like I hijacked your thread. You just mentioned what I’ve been involved in so I grabbed it and ran with it. Another app to try is. http://applicality.com/projects/mobile-topographer-pro/
I’m not 100% sure it will do the trick but it’s pretty good.

Hijacked? More like answered all my questions with the first reply!

I’d love to contribute but I’m both busy with farming and terrible with Python, I’m more of a C/C++ embedded systems guy. If I have a scripting/regex type problem, Perl is my one tool that I use for everything. If I get this running I will definitely kick a couple bucks your way as it could be a huge help around the farm.

One other question about the M+ units is whether they can communicate their corrections via WiFi over short distances or if they need radios. I work with LoRa radios and can put together a pair if I have to, but it would be handy if these will work out of the box for a laser level type task.

In any case I think that I can probably justify the purchase of a pair of M+ rather than a laser level with the information you have given me.

Yes. It can handle lines like that and can still easily be tweaked to handle various inputs. It runs fine on Pi B+ and yes, I have used it for laying out a fence exactly like you mentioned.
The answer to your question about short distances over WiFi is technically, yes, but practically, no, not for working, for setting up, yes, but not working. The distance is too limited. The very simplest is to use www.rtk2go.com and just use a hotspot and your cell phone. You might have difficulty configuring other LoRa’s to work with the M+, but I’m no expert in that field.

I find the PI unit so small that fiting it to the rover poler, belt or any suitable location is small effort.
It could probably be run on smaller units or even as a service on your phone, if it likes that kind of a language. Thats all i could cough up

The very simplest is to use www.rtk2go.com and just use a hotspot and your cell phone

Second this. rtk2go is easy and simple webtool to forward your data.

Unfortunately using your rotary laser on the site benchmarks well be much more advantageous then the ellipsoid based height of the reach. Are you doing traditional land surveying?

I would probably not use the internal support for the Emlid LoRa device, which has a lot of wires hooked to it for some reason. I would just set up a pair to emulate regular packet radios and hook them up to the UART.

Unfortunately my location is in the middle of nowhere, and there is only cell service in a very small radius around the 50’ tower I erected with a 18dBi directional antenna on top of it. So I think I’m stuck with using RF for getting my corrections to my rover.

Be sure to tell us how you did it once it’s working!

@chascoadmin There are no benchmarks of any sort out here in the hills, short of ancient corner stakes on each quarter section. Said stakes have no corresponding elevation data. This sort of farm work is done entirely relative, with the goal being either trapping or draining water.

An example of the usage case is that in a couple months we are putting in a large greenhouse-type building on piles. The tops of the piles need to be within an inch or so of elevation, or else the building will be twisted and not shed snow properly. So the piles will be checked for elevation as they are driven and the ones that are standing proud will be driven deeper until they are all on a flat plane.

That is not something I considered, the source of the elevation vs. the ellipsoid. Can the elevation provided by Reach be converted into a coordinate system that can approximate a local level - level being defined as “perpendicular to the force of gravity”?

“perpendicular to the force of gravity”

Well, that is indeed the ellipsoid. The laser however, will beam out into space (ideally), as it is a straight line.
However, you’d have to use some pretty long buildings for this to be an issue. Over a distance of 100 meters, you’d be off by just under 1 mm, so well within an inch… Over 10 km it is ~8 meters.

However, you’d have to use some pretty long buildings for this to be an issue. Over a distance of 100 meters, you’d be off by just under 1 mm, so well within an inch… Over 10 km it is ~8 meters.

@wizprod Only if you believe the earth isn’t flat! 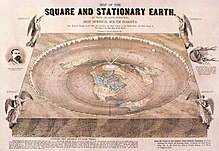 The flat Earth model is an archaic conception of Earth's shape as a plane or disk. Many ancient cultures subscribed to a flat Earth cosmography, including Greece until the classical period, the Bronze Age and Iron Age civilizations of the Near East until the Hellenistic period, India until the Gupta period (early centuries AD), and China until the 17th century. The idea of a spherical Earth appeared in Greek philosophy with Pythagoras (6th century BC), although most pre-Socratics (6th–5th cent...

@RTK_Hunter How much would it be out if the earth is flat?

I guess that would blow this whole system out of the water… I stepped inside a flat earth conference once. I guess this forum is probably the last place they’d live.

If earth is flat, what are hills and caves? Holes?
And how thick is earth then? 2m, 200km?

Definitely not a concern for me, then. The longest building we plan to ever put up is 100’ long, after that things start requiring more engineering than a couple guys with a post pounder. And as far as drainage or land leveling goes I’m happy to get things within 10-20cm let alone 1mm!

Though I did have a pool of water in front of the barn this spring. The ground resolution from my UAV imagery is ~7cm. According to the contours I generated last fall the pool should not have been there. To drain it I had to trench out about 5cm of dirt with a spade…

Flat Earth talk seems to be the joke that just won’t die, it’s made it to just about every corner of the internet. Even here where the entire forum is focused on systems relying on orbiting satellites! I’m not sure how flat earthers think GPS works. Probably a government conspiracy, as usual.

@Brent_W Silly Flat Earthers! Sorry couldn’t help it, saw a disgraceful documentary the other day that I still haven’t recovered from.

And as far as drainage or land leveling goes I’m happy to get things within 10-20cm let alone 1mm!

No need to worry about localizing then. Ellipsoid height be just fine.

In fact perpendicular to gravity is geoid. Which is a quite irregular surface with potential big local slope compare to ellipsoid. It makes a big difference and is the biggest issue with GNSS positioning (which refer to ellipsoid).
So either you couple GNSS with leveling technique, or use geoid models such as EGM.