Yes there is a small hiccup there.

After updating to 2.4.0, and when enabling the base mode GALILEO RTCM3 messages for the first time:

After doing that workaround, now each time you make a change to GALILEO, the “Apply” button will appear.

@bide : Your right, that works! Thanks for the workarround.

How to I debug a LTE modem connection? The modem looks correct connected but there is no data stream over it…

Okay found a solution though it is a little odd. I check the routing table and it returns the following:

Any explanation for that?

EDIT Actually it’s enough to just add the new route, it’s not necessary to remove the WLAN gateway, that was just for the testing purpose. I just wonder why a traceroute always start over the ip 192.168.0.1…

Thank you for the GALILEO update!

I seem to have a problem. I did the upgrade and with a little familiarization I think I had both Rover and Base units where they could record data points. So, the basic software works.

I find myself in the difficult position that my Rover hangs at the software point where the data points are being averaged for the log. It just does not record the data. I can exit this mode and everything works OK otherwise. Next, I try the obvious resort to reload the ReachView 2.4.0 . No problem? No, I am told I am up to date. No more for you…How do I get out of this???

I tried the updater. No help. Survey screen shows number of Rover satellites changing. Coordinates change, but no sigma output. 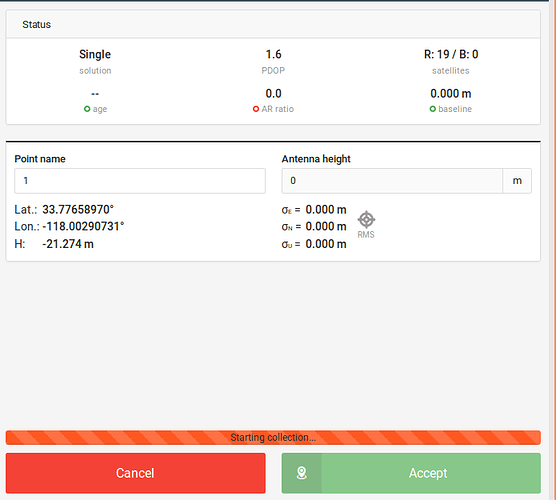 In your screenshot, the thin red bar shows “Starting collection…” That should only be displayed for a fraction of a second before a blue countdown timer bar is shown in the same spot. I also see that the “Accept” button is greyed out. Something is getting stuck.

I have 5 Reach / Reach RS updated and all are working fine with Android smartphone browser and Mozilla(~Firefox) PC browser.

I would first try deleting your project, rebooting Reach and try again. Which web browser were you using? Incognito mode?

Close and reopen the project does the trick Edit: Sometimes.
Its a bug i think @egor.fedorov

Edit: Happens with mine. Used autosave in singel mode and it would not start unless i close and then reopen the project.
Edit: it also apears if signals are bad but stil enough to get a solution within the parameters set in autosave mode.
Edit: Did some more testing with another unit. And it seems if you start it up under bad conditions and move it to get better signals / or if booted under good conditions and before it has run for a while and you have set settings for use and open survey and try to save points, it will not save until bad data that is in the loop is out and/or you adjust some RTK settings and reopen survey tab. Then it will save points.

Seems like there is something in the survey tab that has some parameteres running in the background that we dont see and is keeping survey to save if to much bad data has been collected… Or something.
I can reproduce the probleme but also clear it by doing as stated above.

I’m not using Incognito mode. I am using Firefox with Android. I will look at Cache problems. Sometimes, these things pop up because there are left over Reach Server Pages and Client App? responds to first reply.

I will do a good housecleaning and try again.

And, need to see if I can learn what Incognito mode does. I think maybe it is Private Browsing mode in Firefox.

I am not sure its a cache issue, as i run into this in incongito mode as well.

Guys, thanks for the reports. I am on a vacation this week, but the team working on Reach has confirmed both bugs - the collection start freeze and the apply button not appearing for Galileo.

They are working on a solution for these problems and we will release a fix next week.

I just gotta say it! Have a great holiday!It really seems like you guys are always working! Hope it’s a relaxing holiday and not a business trip! Отдыхай! Hope you get rested!

I am on a vacation this week

I have the feeling that the RTKCONV utility is not ready for Galileo messages, since the lines with E (Galileo) shows up in the converted RINEX files but the corresponding values are empty 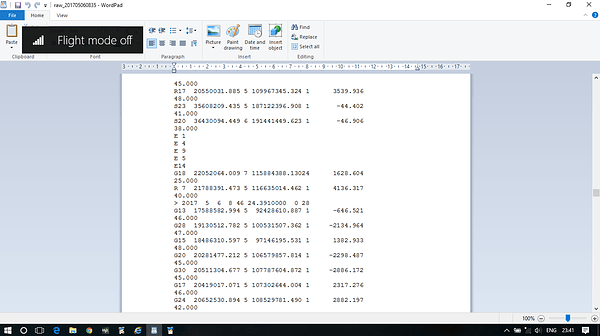 If I use another conversion program there are some numerical values (even though not all RINEX data are there). But I guess that is normal according to ftp://igs.org/pub/data/format/rinex303.pdf 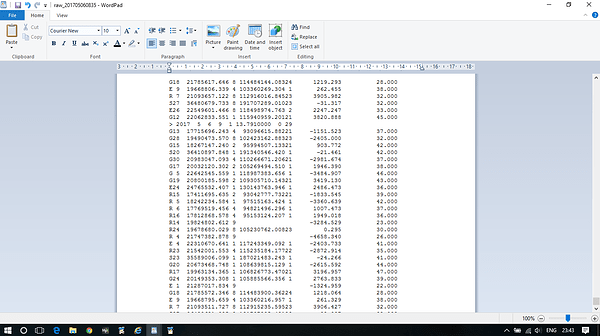 I had the same problem with endless “Starting collection…” and I think it’s a bug.
Try to change “Update rate” in “RTK settings” from 1 Hz to 5 Hz. It works on my both Reach devices with ReachView 2.5.0.
Please let us know if it works for you too.

5 Hz works for me… Thanks for bringing this to our attention.

5 Hz works for me… Thanks for bringing this to our attention.

Thanks for the kind words, guys

The team has rolled out v2.5.0, check the release notes out.