No fix with CORS

Now, I’m trying get correction from cors, for the first time I try cors near by my home about 2kms. But I couldn’t get fix. I turned off glonass AR. 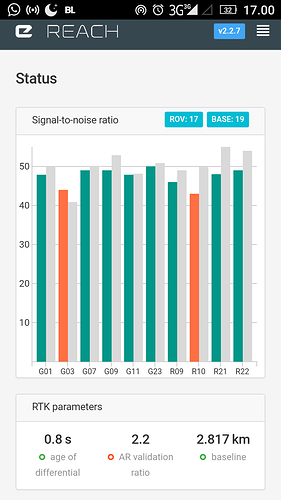 What other settings do you use? continuous/fix&hold, etc
Antenna has clear sky view?
For how long have you tried?
Is it service using vrs? are you reciving rinex format? version?

Do you “Send NMEA position back to base” selected?

Have you had any fixes? When were you collecting data? http://www.swpc.noaa.gov/products/planetary-k-index

I was having trouble using an ideal setup - Reach connected to a Dorne Margolin antenna - Ntrip corrections from a base less 2.5 km away. Then I looked at the Kp index and I was collecting during a period when the Kp index was above 4. Even the survey grade receivers I have had a problem during the little event at 0000 GMT March 31.

I tried almost 1 hour. But fortunately for 10 minutes I tried, cloudy, I got fixed less than 1cm, about 5mm, half hours after I posted this discussion. Thank you all for your kind replies.

I use fixed and hold, and I received rtcm3.
@egor.fedorov, I checked “send back NMEA position”

Fix&hold take longer time to converge fix if you get bad in the loop.
I find continuous more suited for this kind of positioning and recovers faster from float to fix.

Thank you, maybe in other time I will consider continues besides fix and hold.