Got a great deal on some PC components just finished building my new photogrammetry processing machine! still burning it in and running diagnostics, but it’s looking pretty beastly so far! 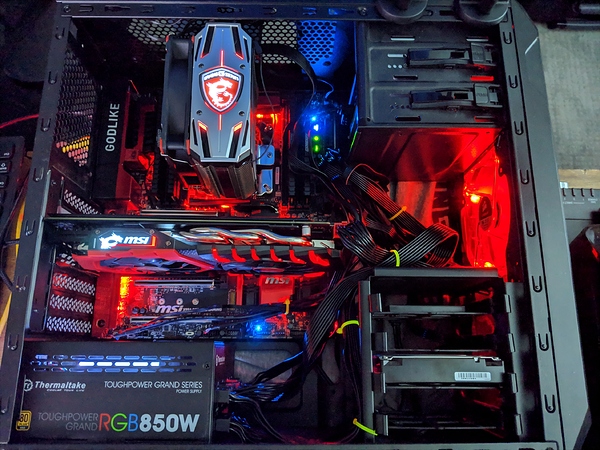 You’ll need some more GPU’s for sure for photogrammetry

What are you running?

Ran the initial test with over clocking at:

Do you promise that you won’t play any video games with that computer?

Haha, this one stays at my house!

Ok, so this is the official Pix4D answer,
"In terms of processing, using SLI technology would not help the processing since it would not increase the available RAM, which is the bottleneck for processing.

SLI would improve the rayCloud visualization for very large projects.

Having two GPUs not connected using SLI would improve the GPU performance for the processing since the state of the GPUs is periodically checked and the less busy one is used."

I’ll do some benchmarking with two separate video cards in comparison. First thing to figure out is whether or not it will let me run two different GPUs since they will not use SLI.

SLI is only useful for things that goes to the graphics ports.
Multiple GPU’s doesn’t even have to be connected to a monitor to be used for computing however.

Photoscan (or metashape, as they now call it) can use multiple GPU’s, so I suspect that Pix4d can do the same, as the performance difference from the CPU is vast!

When you say multiple GPUs do you mean not connected via SLI? What I posted is directly from Pix4d documentation. As they mentioned in the rest of the post SLI’d are only really beneficial for viewing the Ray Cloud and textured model.

Alright, started a 650 images, 50 acre project at full processing. We’ll see how much faster it is than my workstation. Then I’ll put in my old gtx 960 and benchmark again.

You actually have the answer in writing. Viewing is something that goes directly to the monitor, which is why SLI can be beneficial for gaming also.
But for the computing part (usually done with OpenCL), SLI isn’t beneficial. Here the GPU is simply a processor. More ram per card is also beneficial, as that allows for bigger chunks of data to be processed, before more data-transfer is needed (which is “slow”).
Also, if you have a spare/old (as in still modern, but left-over) GPU, I’d suggest to put it your new machine as well. The more, the faster, the better.

Crystal clear! Thanks for the lesson. I’ll put the previous card back in and run a test to see how it compares… And I thought 64 gig would be enough, but the knock-on processing now is already taken up 40 of that and it’s not quite 50% done with the processing of the point cloud.

Your normal PC RAM (amount of RAM) doesn’t give you performance as such. For photogrammetry, CPU (more cores) and GPU speed (more cards, powerful cards, more GPU ram) give you more speed.

If you max your RAM the machine will slow down or hang. So the first test went well. The project took 15h on my laptop and took 8h30m on the new setup so I am happy with it considering what I paid for the new parts. Settings were full image size and densification on Pix4D and I usually use medium so happy with that as well. The project is about 50ac and ended up with 35m points. Same job on DroneDeploy only had 9.5m and their clouds have been totally fine for work so far, but I will run some cut/fill scenarios to get a real comparison.

Next up, adding the GTX 960 back and running it again.

Very Nice setup! I will put my new one together this week. I ordered the processor and MB back in November but just got around to getting the rest. Threadripper 1950x, X399M Tiachi MB, 64GB ram. Waiting on GTX 1080 video card and case to come in later this week.

Michael, are you saying if you max the Ram that MB supports? Or are you talking about setting clock speed of RAM?

I have 64GB and at its highest point Pix4D was using 52 of that. It’s not a very big map, but it’s very intense with 12 buildings and all its kinds of site features. This will be a dedicated processing machine so I don’t see using much more than that. Time will tell.

Like @wizprod said, the ram isn’t going to really make much of a difference so I only overclocked it one step. I haven’t overclocked the graphics cards yet.

Since Michael indicated he got a good deal, it may not matter. But after CES this next week look for improved performance GPUs, particularly from AMD, for better pricing from what I’ve heard. Plus prices have started to drop since crypto mining is loosing value.

I was able to run the map with both graphics cards installed and it was right at about 30 minutes faster, but it had almost a million less points in the cloud so I think I can live with one card for now.