Hi @igor.vereninov, my reach as rover couldn’t update to latest version. I don’t know the problem. This is use rndis. 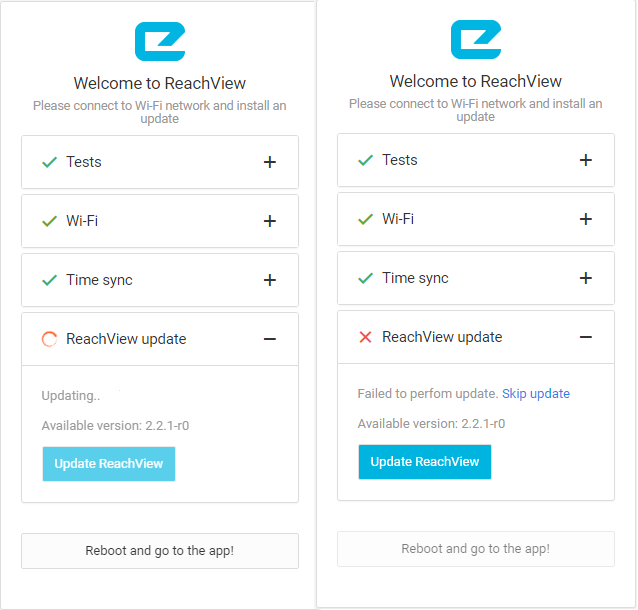 Then I connect reach to wifi, no action such as this picture 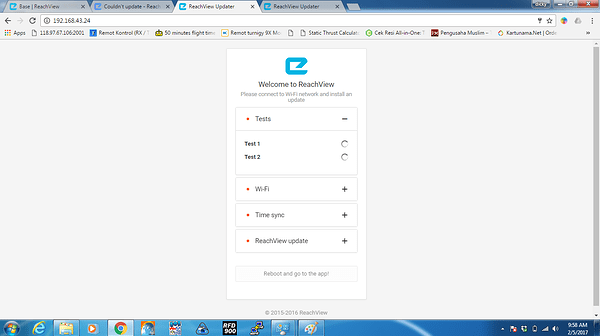 I too briefly had smilar issue. Mine was red on test and time sync but it cleared it self with a refresh (F5).

I have reload page, but can’t fix it.

Hi! What’s showing after a refresh?

No response, test still rolling. But later I will try again. I will report soon after retrying.

The expected behavior is rolling back to the previous version. Due to the fact that we’ve updated the kernel and update failed, after a reboot the device might not load at all.

Keep this in mind and try to provide as much information as possible.

rolling back to the previous version

How to rolling back to previous version?

I have reflashed, then tried updated, but still couldn’t. Maybe it causes my radio can’t e used. Radio led red blinking, but the data can’t be read. No correction received.

RFD900 can consume a lot of power, please power it separately as stated in our docs. It is currently drawing too much power from Reach and it is not able to work.

Also, you are in 3G connection? Please update in wi-fi network.

Just as @igor.vereninov said, using 3g connection is not enough for this update.

Judging by the video, reach can’t download a single file, so try this with a wifi connection please.

Thank you, I will try tomorrow with fast connection.

My first Reach upgraded without a problem on Cellphone restricted Hotspot speed of 125kbps(approx 15kBps). Took around 15-20 minutes. My second unit showed error of can’t upgrade. I restarted after checking for excess tabs on browser and other housecleaning & rebooting. This time, the upgrade went through without problems. Much better than using Intel on earlier versions, where I found I had to consistently restart the process after I realized the download program was consistently failing and I had to restart many times. It would get a little more each time until download was finished.

Now my reach connected to wifi, I test the speed with speedtest.net 9.3Mbps, but still failed to perform update. I hope there a solution to solve my problem.