Can't Get a Fix - Any Published Best Practice Troubleshooting Steps?

So I just received a couple Reach RS+ units. Through lots of reading, it appears in many cases finding a solution to not getting a FIX is not straightforward, involves a very tedious trial & error process and each person’s situation can be different from another’s so there’s no “silver bullet”

I’ve tested the units twice so far in two locations in Washington State (Seattle Suburbs). The first test I collected 6 points none were more than 20 feet apart from each other and base was never 20 feet from rover. I used the default settings right out of the box with exception of course turning LoRa on. The units were on for about 15 minutes. Half of the points I got a fixed solution half I got a float. So the rover was going back and forth between fixed and float.

So I did a second test in a parking lot the next day. This time I used the recommended settings in the Emlid YouTube video (https://www.youtube.com/watch?v=4GfUDoDwEAE) This time I couldn’t get a fix after the base and rover were sitting there for about 20 minutes. So I reset the settings on both units back to the defaults and I only was able to momentarily get a fix a couple times after that, similar to as before but probably a little worse. (Gee, that video was SURE HELPFUL!)

There are SO many combinations of settings on these things the permutations are seemingly endless. Has anyone, please, anyone, put together a concise, well-written guide to troubleshooting which begins at the most common solutions and then digs deeper… if that doesn’t work… then try this… etc. ?

Otherwise I fear I’ll end up having to spend hours and hour reading dozens and dozens past posts on this forum and going back and forth and back and forth with people. And while the input is helpful each user has a different level of knowledge and experience and a different environment. Has someone figured out "these steps usually work for a lot of people [not just me]? I know these units are a good bang for the buck compared to “traditional” surveying hardware, but TIME IS MONEY and I can deal with these being occasionally finicky but I don’t have the time to spend hours and hours trying to find the magical combination of settings to get the thing to work reliably!

One thing odd I observed is the Rover had mid-20’s for number of sats and the base had about 10 less on average throughout the whole time and the units were like 20 feet from each other!??

Is the first line of troubleshooting basically to try to identify which sat networks have the lowest snr on average for the location you are at and turn them off?

Also the video begs the question, if Emlid’s video recommends changing the settings, why the heck aren’t those the default settings in the first place!!!???

Just a quick link to give you some ideas. Of course every situation is different every time you visit every site, but I am confident that you will learn to compensate. Start with my defaults and then adjust which constellations your rover is using. Being on the West coast you may benefit from QZS or Beidou…

Basic Workflow for a Newbie? Getting started

I too had quite some trouble achieving fixes. I have had much better luck since turning my output signal strength down to 16db. The other observation as you mentioned in my area is that we seem to have some GLONASS interference as related to the Reach receivers. I’ve never had an issue with my Topcon, but that is the first constellation I turn off to troubleshoot. My normal congregation is GPS/GLONASS/Galileo/SBAS. There again in my area I do not see much confidence in QZS. Otherwise my setup is…

So my third test I just set the units on the corners of a picnic table and experimented with about 40 different setting combinations and only momentarily got a fix. However I noticed these units are SUPER SENSITIVE to positioning based on moving them and watching the SNR. I’m guessing most of the issues are not settings but environment requiring setting changes. Hills trees, radio interference, I’m sure they all contribute.

Well my fourth test went well at another location in a parking lot with nice clear site of sky but with 800 ft mountain about 3 miles away to the Southwest. I just turned GPS, Glonass, and Galileo on. I got a fix in about a minute or two. I surveyed 8 points and of course when I went to survey the last point (50 ft from base) I lost the fix. So I increased the angle filter from 15-degrees to 20 I think and turned on SBAS. I got the fix again but frankly I have no idea if my settings changes were what did it.

So I guess each location is going to be a crap shoot as far as how hard it will be to get a fix and that’s just something you have to live with due to the nature of the technology.

When plagued with trouble I would recommend going minimal. You are in the CONUS and are well served by your country’s GPS system. It should be all you need to get a good fix.

Try that and see if you get a good repeatable result. If that works, then you can increase your settings and get comfortable. Let us know how it goes. Good luck!

Well I did my first full blown survey. It was in ideal conditions with no interference, clear sky, no hills or obstructions. Got an held the fix the whole time, about an hour, 70 points collected.

Bide, on your instructions can you clarify which settings are for both units and which are for one or the other. #4 is clear in that it says on “base mode settings” On #2, this is for both units? The Emlid video shows setting 1Hz on base and 5Hz on rover which I thought was odd.

On #3, my understanding is indeed enable everything on both and then when having fix issues, start eliminating constellations only on the rover. I’m surprised the software doesn’t have some sort of AI recommendation based on the average SNR of the satellites to either automatically or recommend turning off the ones having signal issues? Is there a legend somewhere of the 3 character satellite labels that indicates which ones belong to which constellations?

#2 - Rover is 5hz because the Rover moves. This may not be needed if you are always walking slow in areas without interference. I have a mount for my vehicle when I am in large site to traverse between points so 5hz helps maintain my connection.
#3 - GPS/GLONASS/Galileo/SBAS 90% of the time. GLONASS has been a problem fore so it’s the first to go if there is trouble. 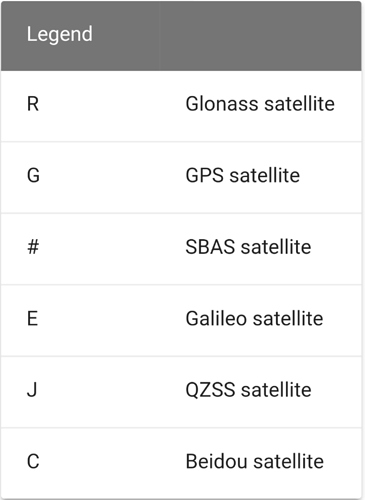 As for the rest, never needed it myself. No fix = interference which could be any of the following. Radio, wifi, Bluetooth, microwaves, electromagnetic, atmospheric, ionospheric and vegetation. Of the most common. You can control the majority of them, but sometimes there just isn’t anything you can do and less you are comfortable with post-processing you won’t get a good survey anyways. Once you have found good settings otherwise don’t mess with them unless you are switching between base/Rover, CORS, Ntrip and etc…

Congrats on a successful survey!

Just use 1Hz for both. You are just doing static points, yes? Well as long as you have enough data at each point, then there’s no need to speed it up. Base and rover update frequencies do not have to match.

On #3, my understanding is indeed enable everything on both and then when having fix issues, start eliminating constellations only on the rover.

Sure. You could do that, or you could just switch off some of the base RTCM3 messages instead of disabling constellations on the rover.

I’m surprised the software doesn’t have some sort of AI recommendation based on the average SNR of the satellites to either automatically or recommend turning off the ones having signal issues?

Actually, it does do that.

For RTK, the base needs these set: satellite constellations, sample rate, RTCM3 messages, and LoRa (or other link). The rover does the actual RTK processing work, so with the exception of the RTCM3 settings, it needs the same as the base. In addition, the rover also needs to be set for anything related to the real-time processing, like ambiguity resolution settings, etc.